The Tiling feature provides a method by which a larger job can be cut from a series of smaller tiles which are then assembed after the cutting process is completed in order to create the larger scale job.

By example, the Tiling feaure will allow the user to design a large scale image of 24 inches height by 24 inches width and cut it out in several passes. Even though such a material size cannot be cut in a single pass due to the Silhouette's maximum cutting width limitation of 12 inches, the Tiling feature will automatically segment the job into a series of smaller jobs that can be cut out and then assembled to acheive the final 24 inch by 24 inch project.

The Tiling feature is availabe only when running the Business Edition version in the Media Layout mode.

The following options are available in the Tiling panel:

Tiling Active - This option turns the feature on or off as desired. The option can be combined with other Business Edition features, such as Media Layout Nesting and Matrix Copy. (NOTE: This the processed design shown in the Media Layout View will only change to multiple panels if the image exceeds the available cutting area.)

When Tiling is active, the Design View will display a series of numbered tiles to display how the project will be split up into the resulting cut jobs. 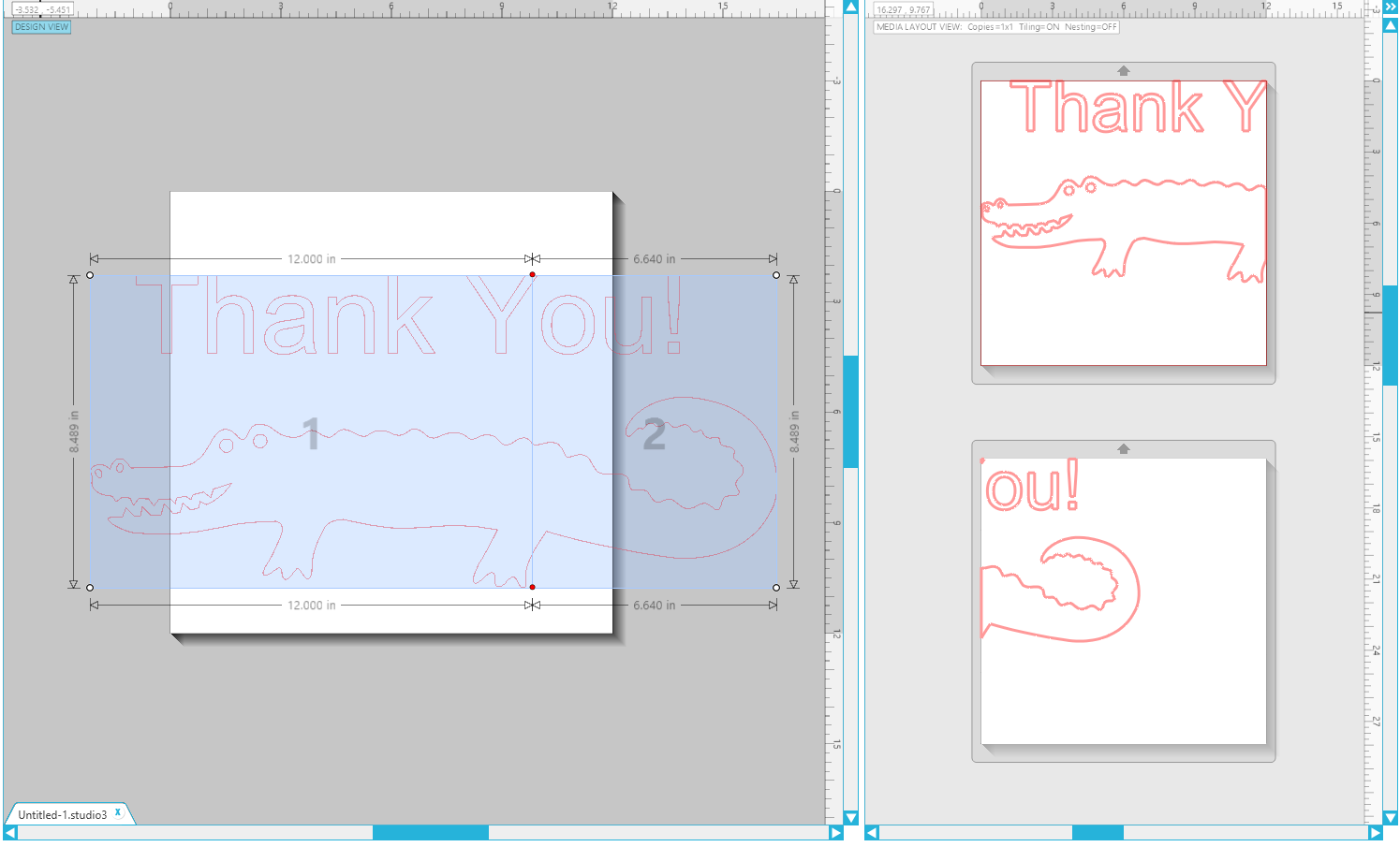 These tiles can be controlled by the following further available tools found in the Tiling panel:

Configure Position and Size - The options found in this section will allow for the adjustment of the tile sizes and positioning for how the tiles will process the resulting cut job. These include options to control the tiles in regard to:

Maintain Aspect - This option will maintain the aspect ratio of the master tile when adjusting other dimensions listed above.

Automatic - This option will resize the tiles to the size of the project being cut. The tiling division lines will be positioned automatically according to the defined media size.

Custom - This option will allow you to edit the tiles by dragging the division lines and nodes.

Regular Grid - This option will resize the tiles to maintain width and height dimensions for the individual tiles, rather than sizing them according to the media size specifically.

Margin - This option will create an overlap of the resulting cut, which may be useful as overlap in the final resulting job may be required.

Show Dimensions - This option toggles the tile sizes on and off.

All Tiles - This option will have all tiles selected to be cut.

Selected Tiles Only - This option allows for selected tiles only to be cut. Alternately, you may click in the Design View on the tiles to toggle them on or off.

Separation - This option adjusts the separation dimension between tiles being cut.